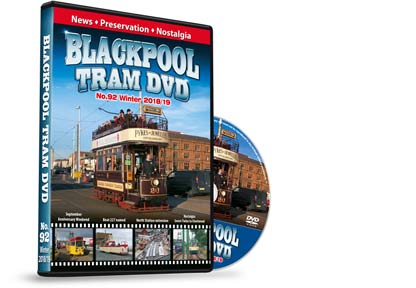 Autumn 2018: Footage from the September Spectacular Anniversary weekend starting at Rigby Road depot on the Saturday morning with trams departing. 706, 703 and 634 are lined up on Blundell Street and 719 works the depot shuttle. Action from the prom features all the trams in service and into the evening the Illuminated trams work tours. On the Sunday, OMO 8 is extracted from long term store for display and again many trams are in service. Footage from October includes Birkenhead 20 making its debut and Boat car 227 is named and launched at North Pier. In November, 20 works its final tour and is loaded for the journey home with the Western Train being used in the Fleetwood Christmas lights switch-on parade.

Preservation: Very brief footage of the restoration work carried out so far on Railcoach 279 during the autumn.

North Station Extension: Part 3 of a look at the North Pier to North Station extension with the curved track being laid outside the Wilko store and the triangular junction going in at Talbot Square.

Year End: During 2018, 44 trams ran in passenger service, made up of 18 Flexitys, five ‘B’ fleet double deckers and 21 heritage and Illuminated cars. All of them are featured here.

Nostalgia: Footage from a Market Tuesday in July 1999 when all seven Twins ran to Fleetwood; OMO 10 at a conference centre in Reading from 1997 and all the way back to 1992 with footage filmed around the tram depot and Manchester Square including a high tide and flooded tram lines!