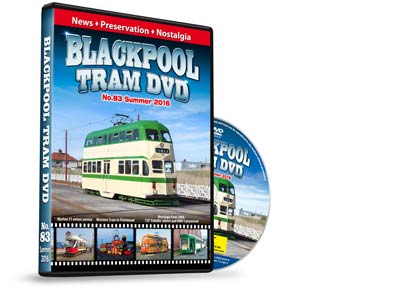 Spring 2016: A comprehensive round-up of news from the spring of 2016 with footage from all three Bank Holiday weekends and the operation of the six tram Gold Heritage service. Highlights include 675+685 and 631 on a special Good Friday evening tour to Fleetwood; the first day of service for Marton 31; the return to service of Balloon car 723 in its 1980s livery; the special evening tour with the Western Train to Starr Gate and Fleetwood plus Boat cars on the prom, Balloons in Fleetwood, 680 running as an evening diners’ tram; 31 turning back at Cleveleys; a ride on 31 and 227 and much more. (100 minutes)

Tram ride: Enjoy a ride on Balloon 715 from Cleveleys to North Pier, filmed from the front lower deck behind the driver, on a fine sunny day in June 2015. (16 minutes)

Nostalgia: Available for the very first time on DVD – Blackpool Tram Video Magazine No.21 – the original version, uncut and exactly how it was released in September 2000. Footage includes the new ‘Valhalla’ advert on 720; 641 gets a ‘Kit Kat’ wrap; 606 on its final journey prior to export to America; OMO 5 moves into preservation; a busy market Tuesday from July and a feature on the recently withdrawn Rocket and Train plus many long-gone liveries and long-lost trams. (61 minutes)