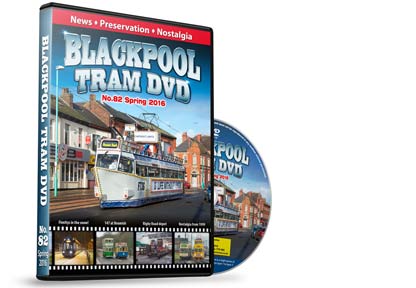 Rigby Road depot: Action from two visits to Rigby Road depot with 737 and 723 in the Paint Shop; new destination blinds being fitted; Lytham 43 is delivered; 147 departs for Beamish and newly arrived cars 31, 634 and 681 are seen. (15 minutes)

Preservation: A visit to Beamish museum to see Standard 147 on its debut running weekend, part of the ‘Power from the Past’ event. Cars 16, 114 and 196 are also featured. (9 minutes)
Tram ride: Enjoy a ride on Balloon 715 from Fleetwood to Cleveleys, filmed from the front lower deck behind the driver, on a fine sunny day in June 2015. (14 minutes)

Nostalgia: Available for the very first time on DVD – Blackpool Tram Video Magazine No.19 – the original version, uncut and exactly how it was released in March 2000. Action from the amazing winter period of 1999/2000 with Balloons on Cleveleys service, Brush cars on Fleetwood service plus many long gone liveries and long lost trams. (61 minutes)