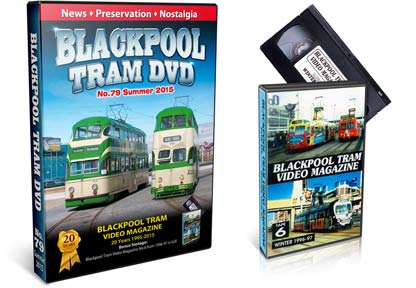 Spring 2015: News from the Blackpool Tramway from spring 2015 with the commencement of the brand new Heritage tram service. Balloon 717 was first, used on a Dine and Ride event and then it’s the four-day Easter Weekend. With the new ‘Gold’ service using six trams at once, the likes of 40, 66, 147, 227, 230, 700 and 706 are all filmed; Hollywood came to Blackpool in early May with the shooting of a major production outside Blackpool Tower. The tram service was split with Flexitys turning back at North Pier and 711 and 719 were used on a special Starr Gate – Manchester Square shuttle; There’s full coverage of the May Day and Spring Bank Holiday weekends with a mini feature on 715 which returned to service after five years. Footage includes cars 600 and 701 as well as 642 and 648 and various trams running to Fleetwood. (97 minutes)

Rigby Road depot: For the first time in a number of years our cameras visit Rigby Road depot. Home to the Heritage fleet as well the B fleet, many of the stored cars are seen including Trailer 685 in the Paint Shop. (7 minutes)

Nostalgia: Unavailable for 11 years and now on DVD for the very first time: Blackpool Tram Video Magazine No.6 – the original version, uncut and exactly how it was released 19 years ago, back in December 1996, with tramway news and features from 1996 – including the entire tram fleet from then. (61 minutes)